The problem I’m having

Libraries listed in packages.yml are failing in cloud dbt. The libraries are located in a github private repository.

The context of why I’m trying to do this

Retrieving model code that has been packaged into a module.

For testing, the github username and access token are directly in the URL. dbt deps works locally but when the code runs in cloud dbt it fails.

Some example code or error messages

This is the error message with ellipses replacing some of the pathing:

Hey @dandoyle, I understand that you can’t show the actual tokens in the public message, but it makes it tricky to debug! Could you reach out to the dbt Cloud support team in-app? They will be able to have a closer look at logs etc and be able to be more helpful

Hi @dandoyle, I’m facing the exact issue with importing private packages from Github in dbt Cloud. I was wondering whether you have managed to find a solution or workout for the issue yet

This might be the cause of your issue: Private packages must be cloned using access tokens provided by environment variables | dbt Developer Hub

This might be the cause of your issue: Private packages must be cloned using access tokens provided by environment variables | dbt Developer Hub

We did that too and it failed. The debug message makes it very difficult to know if we configured it incorrectly if indeed Cloud dbt is looking for variable substitution. Well, I guess I will give it go again after a week with a fresh mind. Maybe I will not repeat a syntactical error if that is what was tripping things up.

As a heads up, we contacted support. They told us to go back to the community. I am back checking on this thread after so long because support just determined they could not support us - after more than 10 days. I am a little frustrated and disappointed. Thank you for your help.

Hi @dandoyle, I’m facing the exact issue with importing private packages from Github in dbt Cloud. I was wondering whether you have managed to find a solution or workout for the issue yet

Nope. Support said to come back to the community because it likely had to do with our structure or syntax… I attached the response so you can see for yourself.

I am still working the problem and hopeful I can find the solution and will reply with anything I find. 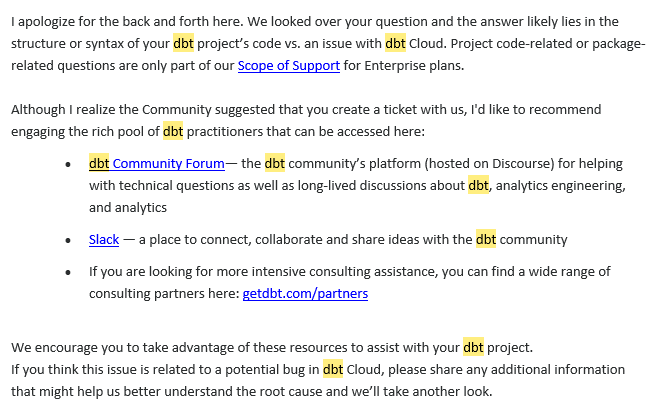 I figured it out. The documentation is not necessarily clear about this but 2 things:

After I did these 2 things, the logic is building.

After some testing, I determined that whatever was failing is now fixed in Cloud dbt. So the rules are not a thing and everything is working as documented.

Here are the tests I ran after the above success which used the access token env var from the page Joel linked as DBT_ENV_SECRET_GIT_CREDENTIAL:

Make sure your URL for github uses all forward slashes.

One thing I am not sure of, which may not be a thing, I could not reset the “environment” between tests and I don’t know how Cloud dbt functions behind the scene so all the success after the first success may have had state that allowed the other forms to pass.

Thank you very much @dandoyle! This is extremely helpful!

This topic was automatically closed 7 days after the last reply. New replies are no longer allowed.